I really don’t know how to categorise my relationship with frogs.

It’s probably not anxiety producing enough to classify as a phobia. But I’d definitely classify it as an ‘extreme aversion’.

If I saw a frog in a zoo exhibit, I’d probably just look away.

In everyday circumstances, if I encountered a frog I might not scream. I would definitely cringe loudly and move very quickly away in a jogging fashion.

If a frog looked like jumping on me, well, sorry, it’s every man for himself. Get out of my way!

It’s one of the reasons I love living in Melbourne. Pretty much frog-free.

They say that many of our irrational fears are caused by traumatic childhood experiences.

One of my very earliest childhood memories involves a frog. And trauma. Both at the same time. 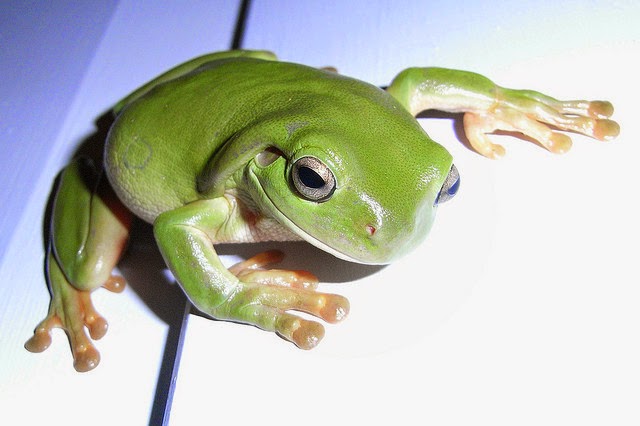 I was at preschool, so we are talking about the late 60s. The toilet at our preschool was an old fashioned white weatherboard outhouse, which really wasn’t so old fashioned at the time. It had plumbing, and the toilet was flushed by pulling an overhead chain.

This toilet had a resident frog. I swear he was about 3 inches in body length, and I’m not counting his slimy legs. He lived up inside the rim of the toilet bowl and although he fidgeted a bit he never moved UNLESS the toilet was flushed.

I think you probably know where I’m going with this.

There was a rule in place that we all lined up to go to the toilet, and the toilet was never flushed until we had all been to the toilet.

Oh, did I say the toilet was NEVER flushed until we had all been to the toilet?

What I meant to say, was that it was never flushed until we had all been, EXCEPT FOR THE DAY SOMEBODY FLUSHED THE TOILET WHILE I WAS SITTING ON IT!

It happened in slow motion.

She (yes, I remember exactly who it was) had been very specific in an earlier threat involving me, the toilet, and the frog.

So there I was, sitting nervously on the toilet. I had relaxed though, because I couldn’t see her in the queue of children in front of me.

I’m still not sure whether she came from the grassy knoll or the book depository but with amazing stealth she suddenly appeared and lurched for the toilet chain.

Wooooosh. That cranky old frog was liberated from his cosy home by the swirling toilet waters.

Now, you probably have a horrifying mental image of a frightened four year old girl simultaneously hoisting up her cottontails whilst fleeing the outhouse with a giant green frog clinging to her bum. While that is certainly the version I have told my children, in truth I jumped off that toilet with the speed of lightning, and left the frog to swirl around the toilet for a while before he crawled back into his hiding place.

But still. Sometimes it’s about what could have been. A question I terrified myself with every day when I returned to the scene of that crime.

There are other frog stories to tell. But I will save those for another day.

photo credit: andydolman via photopin cc
Posted by The Vinyl Edition at 14:49