Have a Nice Day!

I don’t recall when customer service staff in Australia started saying this, probably about 20 years ago, but I remember it really bothered some people at the time. It was seen as too American.

I can’t say I cared one way or the other, and to be honest, I wish we’d just stuck with “have a nice day” because the crap we have to put up with now is much more annoying.

I’m all for a bit of chit-chat at the checkout - I find it quite soothing while I’m handing over an arm and a leg - but I’m not up for the scripted ‘filler’ type of conversations.

At 9.30 in the morning at the supermarket checkout, “How has your day been so far?” leaves me a little blank. “Yeah, great thanks. I had cereal and some coffee. Actually two cups. Stayed in the bathroom a bit too long, and then I couldn’t find my favourite bra, so I only had time to put vegemite on the kids’ lunch rolls instead of chicken and mayo like I’d planned to. Walked the kids to school, saw some rabbits on the way, walked home, got in the car, found a parking spot, filled my trolley with much more than I’d intended, and now, well, here I am!”

It just pisses me off when they come up with those brainless scripted questions. Half the time I get someone friendly who just picks up on something I say in passing and we have a general chat about that. And that’s always good. But the other half give me a blank look, and serve me up something annoying like “So what do you have planned for the rest of the day?” I really don’t know what they expect from me, because I’m pretty sure if I ran through my plans for the rest of the day I would leave them in some kind of semi-comatose condition. So I just say something like “Nothing exciting” or “Just the usual” and leave the premises feeling like a giant boring loser on her way back to Loserville.

I’m reminded of the days many years ago when I regularly visited the hairdresser at night, because I worked quite long hours. After a gruelling 2-3 hour session of foils and cutting, I was handed over to the apprentice to dry my hair. At this point it would be close to 9pm, but every time without fail she would say “So where are you going tonight with your new hair?” She always seemed disappointed when I sheepishly confessed that I was just going home. To this very day I still can’t figure out where she expected me to be going after 9pm on a Thursday night.

And then there are the up-selling questions, particularly at the petrol station. “Would you like a chocolate bar and bottle of coke with that petrol?” Nope, I just paid a king’s ransom for the petrol, so I don’t need a $3 chocolate bar that I could buy in the supermarket for $1. But thanks for the offer.

Bring back “Have a Nice Day”. It might not always be sincere, but at least I can just smile and wave.

Or better still, given that I’ve just emptied the contents of my wallet to pay for your products, if you can't manage to come up with something interesting, just say "hi" and "thank you" and leave it at that. 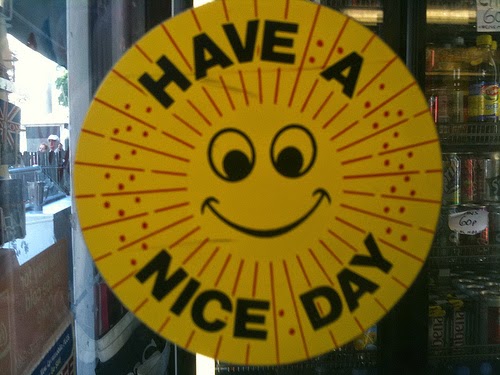 photo credit: Have a nice day via photopin (license)