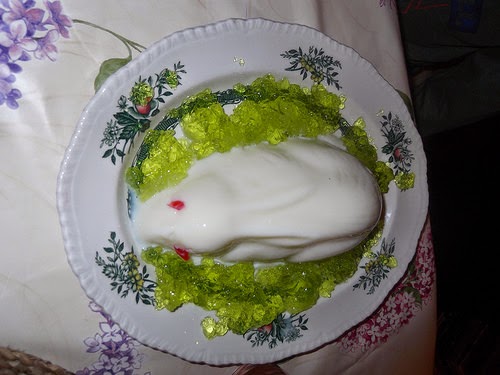 I’m fairly sure every spoonful of blancmange I’ve ever eaten was in Taree, the NSW town where we visited my maternal grandparents during school holidays. Nowhere else.

The picture above is a fancy rabbit-moulded blancmange. I’m not sure why, but throughout history, blancmanges were often in rabbit form, maybe because in the middle ages the earliest blancmanges were actually savoury, not sweet. Anyway, I don’t recall any of the rabbit mould nonsense at my grandmother’s house. Her desserts were set in a bowl and scooped straight out of there.

We called my grandmother Nancy. Actually that was her real name. I started the whole calling her by her Christian name thing, apparently, when I was a toddler, and it stuck. She was never grandma or nanna to us.

Anyway, Nancy was born in the middle of World War One, so she lived through those lean times in Australia’s history when people did the best they could with what they had. She often served up the kind of meals that we didn’t have at home. Most of it was really tasty, hearty, old-fashioned food, but every now and then she’d throw in a few zingers like steak and kidney pie that I struggled with.

Fortunately for us, Nancy also had an entire artillery of thrifty desserts. Apart from blancmange, she made flummery, lemon sago, and tapioca pudding. Google has the details if you've never heard of these. The flummery was my favourite. And you could always count on some rhubarb finding its way up from the garden too. These were Nancy foods. I can’t imagine them existing in anyone else’s house. They were hers.

Here is a picture of my grandparents in 1939 (before I met them) strolling along George Street in Sydney. They look like they’ve just been spotted by the paparazzi, don’t they? 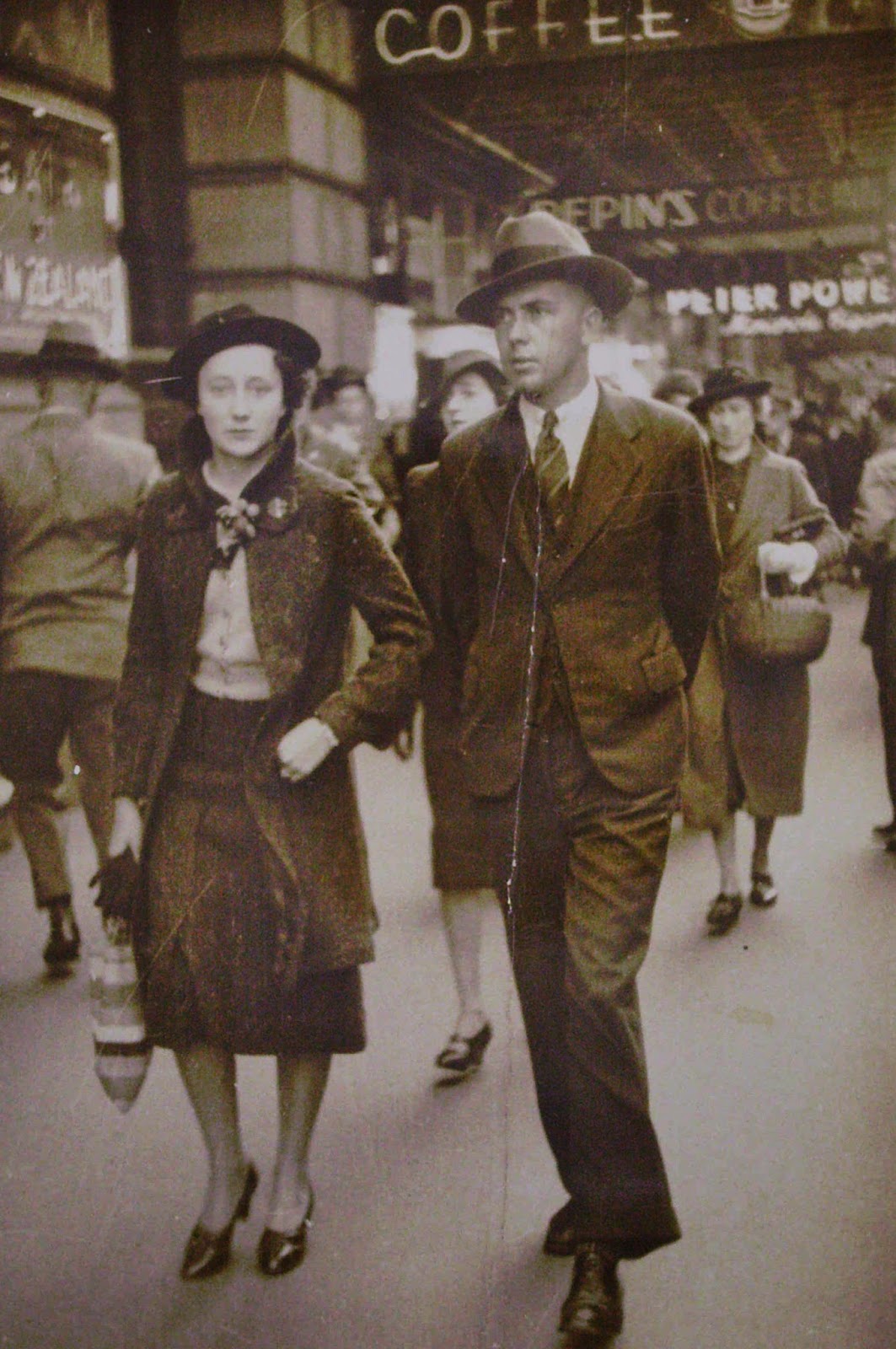 And here they are again, a few decades down the track. 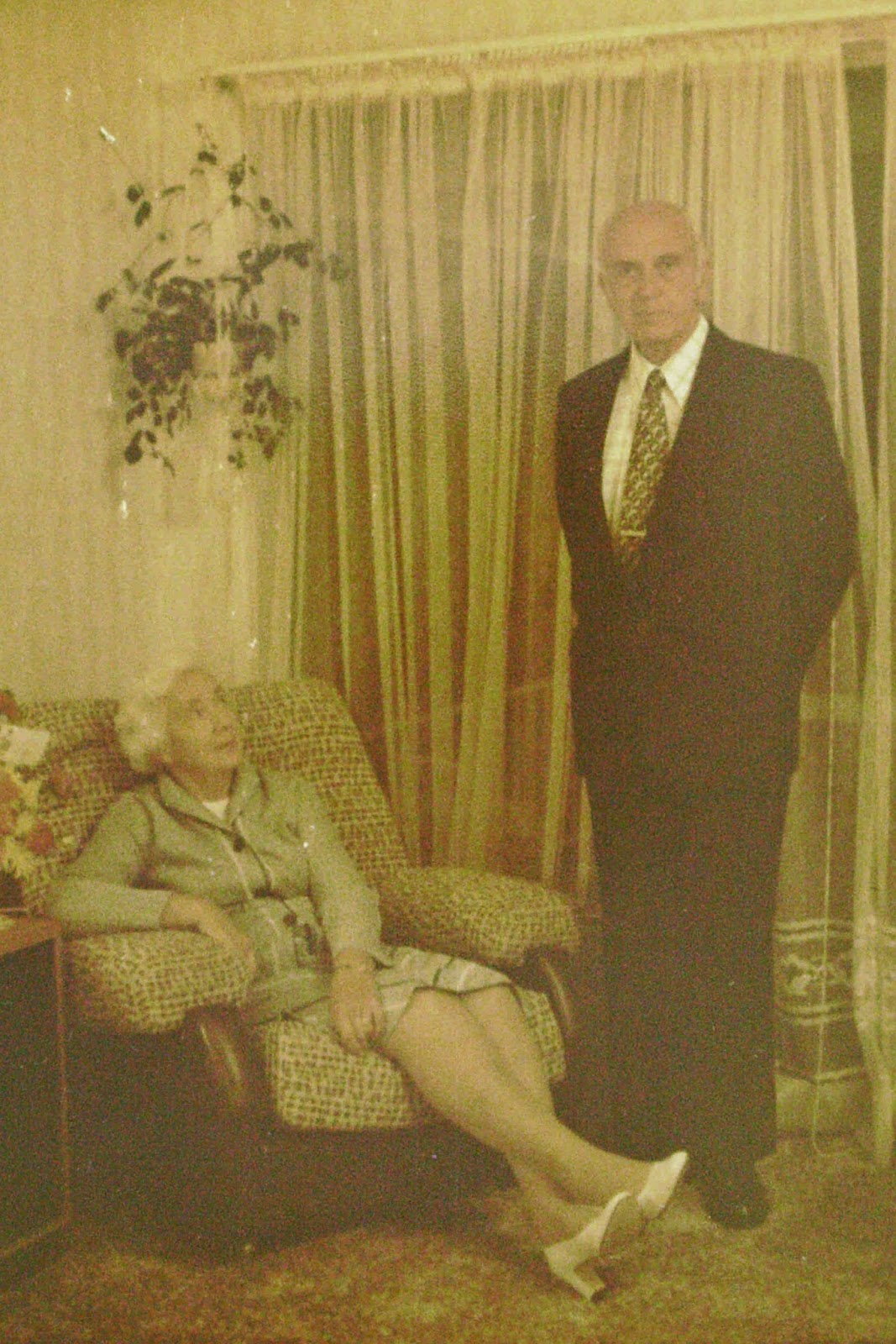 Nancy was the type of grandmother who, when you were leaving the house, would always ask “Have you got a cardigan? And a handkerchief?” She would even ask the grown-ups, supposedly as a joke, but I think she really wanted to know. She worried about things like that.

The biscuit tin was always full of her home-made biscuits (not that we were allowed to have too many). If visitors appeared on the horizon she would rustle up a tea cake or something equally simple but delicious. They had so many friends, they really did. Climbing in the windows.

Nancy remembered the important people in my little childish life, not just teachers or whatever - she remembered my friends, and she talked about them like they were important to her too. That's what Nancy was like.

So that’s B for Blancmange. And flummery. And all of the other Nancy foods.