Canteen/Tuckshop Food Then and Now 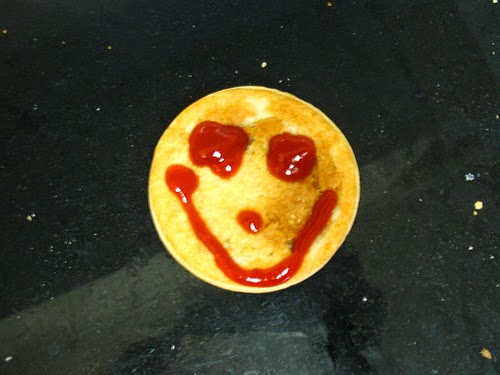 As a parent of primary school children I need to report that in the decades between when I was at primary school in the 70s, and now, one thing hasn’t changed at all - canteen food is still the holy grail.

Apart from the one lunch order per term my kids are allowed to use their pocket money for snacks at the canteen, if they want to. I’m not crazy about it, but it’s their choice, and besides, I don’t really pay them much anyway, compared to canteen prices.

What is it about canteen/tuckshop food that is so appealing decade after decade?  I think it’s a combination of
a) access to food/drink you don’t have every day and
b) a child’s first experience of independent financial activity.

To back up my theory I recently surveyed a group of two children, and came up with some interesting results.

Apparently it is all about visiting the pointy end of the food pyramid. When asked what is so appealing about buying food from the canteen, one respondent said “It’s so we can have junk food.” The second respondent appeared to confirm this, saying “Well Mum, they have apples there, but nobody buys them.”

Further questioned about the concept of being able to take the responsibility of buying something independently without a parent present, my respondents shrugged their shoulders. “Well, maybe it’s good to buy it yourself because nobody can tell you to buy an apple instead of chips.” The second respondent nodded “Yeah”.

Maybe they are right. If I asked you what comes to mind first when you think of canteen food from your own school days, what would it be? For me, there is no doubt:

I have never ever tasted a pie as good as our school pies in primary school. Every winter there was nothing more intoxicating than the smell of those pies from the canteen. And for the lucky recipients at lunchtime, they lived up to their promise. I was allowed to have one pie very winter, and it was such an event. Twenty two cents would be wrapped in a scrap of paper with the order scribbled on it, and at lunch time that pie would arrive in a crisp white and green paper bag. Ambrosia.

The other item I coveted from the canteen was a coffee bun. It was a finger bun with pink icing, and lashings of butter. They were 12 cents. I don’t know why they were called coffee buns at our canteen, and I’ve never hear them referred to as anything but finger buns since then, but they were so good.

I also remember what my teachers ordered for themselves every day. Mrs P always ate a chocolate Paddle Pop after lunch. She carefully removed the wrapper and laid it flat on her palm to catch the drips. I tried that myself but it was fairly tedious. And Mrs M would buy a five cent packet of peanuts every day and eat them on playground duty. Round and round the playground she would stalk, barking reprimands at misbehaving students, all the while pecking at that bag of peanuts. Probably not something that would happen today, I’d wager.

Do you have fond memories of canteen/tuckshop food? What was your favourite?

And one more thing. Can anyone explain why I can remember the exact prices of canteen items from primary school when I can’t even remember what I had for breakfast this morning?

photo credit: My Happy Pie Technique via photopin (license)
Posted by The Vinyl Edition at 12:51