Frozen Meat ... and a thief in our midst. 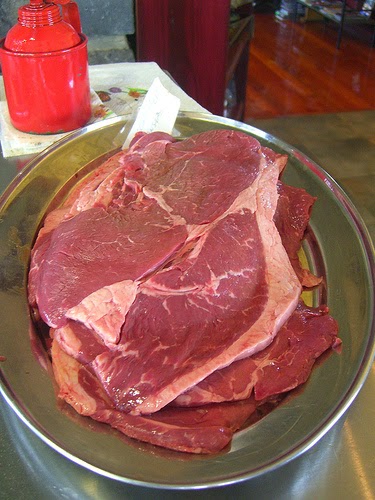 *Warning: This post contains at least two things we did in the olden days and survived, but wouldn’t do now*

We had the biggest freezer you would ever wish to see - so big that it was housed downstairs in the laundry. It often contained half a cow and a whole coop full of chickens, as well as ice cream and other staples.

When the half-cows arrived our family would gather at the dining room table to organise the various cuts of meat into plastic bags, suck the air out of the bags, seal them and label them with a big texta before placing them in the freezer.

In mild weather our frozen meat for dinner was thawed out on the back verandah - commonly done in the olden days without our meat playing host to an impressive colony of bacteria like it might today.

One day, the unthinkable happened. Our frozen steak was stolen from its thawing perch!

We were shocked and bewildered. The crime rate in our friendly neighbourhood had just rocketed above its usual zero. Who could it be? We knew all of our neighbours, so they were ruled out immediately. Was it a transient thief, or a professional burglar?

I slept uneasily that night, envisaging a shadowy figure with a mask and a gun, lurking around our house, perhaps searching for the mother-load of frozen meat in the laundry.

The next day we left a frozen chook in the usual thawing place, hoping our thief would not return. But he did return…and this time he didn’t succeed.

It turns out the frozen chook was a lot harder for our thief to fit in his mouth, and as he tried to take hold of it, the rock-hard chook rolled down the back stairs making enough noise to alert Mrs C, our babysitter.

The thief was a big black dog!

After that incident we stopped thawing our meat outdoors. The black dog, however, became a frequent scapegoat when other items went missing. Apparently he had quite a sweet tooth, and was quite partial to the chocolate flavoured portion of the Neapolitan ice cream.


He was never apprehended, and remained at large for many years.