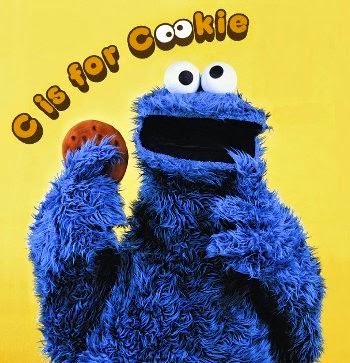 I remember the first day Sesame Street aired on Australian TV. I was five. Mum had flagged it for our viewing pleasure, and when we sat down on that first morning we were not disappointed. It was entertaining, amusing, and somewhat educational.

And in my little culturally homogenous world, the American content was tantalising.

Somehow ‘cookies’ and ‘cupcakes’ were much more fascinating than ‘biscuits’ and ‘patty cakes’. The ‘pickles’ they had with their ‘burgers’ were not the same as the ‘pickles’ we made with a bumper choko crop. And it took me a while to figure out that the ‘jelly’ on their ‘peanut butter and jelly sandwiches’ was not the same ‘jelly’ we ate with our ice cream.

One of my favourite segments on Sesame Street was a counting backwards and forwards segment, featuring the number of the day. At the end of the segment a clumsy baker would bring out a platter laden with baked goods, announce what they were in a grand proclamation, and then fall down the stairs. He baked some wonderful things, most of them sounding very exotic to me:
1 wedding cake
2 chocolate cream pies
3 birthday cakes
4 root beer floats
5 fancy fruit cakes
6 strawberry shortcakes
7 pumpkin pies
8 raspberry pudding desserts
9 coconut custard pies
10 chocolate layer cakes
And these lavish (to me) items ended up all over the baker and the floor after a spectacular roll down the stairs. You just can’t go wrong with that kind of humour for little kids. My brother and I called that part of the segment ‘Bung Smucky’. Lord knows why we came up with those exact words, but if you say them slowly and loudly they do encapsulate the baker’s grand announcement of his product before his dramatic fall down the stairs.

Times have certainly changed. There are so many other media platforms available to kids. My 8 and 9 year olds are great YouTube fans. Some of the stuff on there is crap, but some of it is really, really good.

My daughter, in particular, watches quite a lot of creative material, but the ones I often watch over her shoulder are instructional pieces involving the most amazing sweet-making and decorating.

Anyway a few weeks ago, Easter Monday I think, I awoke to the distinct sound of a project being undertaken in the kitchen. A project involving a YouTube instructional video about using spare easter eggs  to make a popular American snack called a ‘s’more’. Originating as a campfire snack, a ‘s’more’ consists of warm toasted marshmallows and a layer of chocolate placed between graham crackers.
The key word here is ‘graham’, a specific style of biscuit sold in America, a bit like a sweeter version of a shredded wheat biscuit, but really there is no equivalent here. Unfortunately my children only picked up on the word ‘cracker’ so they were using savoury rice crackers. And planning to put them in the microwave with chocolate and marshmallows.

It’s a good thing I got out of bed when I did. Wouldn’t want to waste those easter eggs. Or the savoury rice crackers for that matter.