It Started With a School Excursion

My kids both went on a school excursion today. On the way to school I was thinking about one particular excursion from my own school days, but I kept it to myself.

When I was in Grade 5 we loaded up a bus with a few classes from my school to visit a beach about an hour away.

Along the way we mysteriously detoured to a house belonging to a teacher from another class. As he ducked inside the house I assumed he must have forgotten his lunch or something, but instead he returned to the bus with a box full of tiny grey kittens.

Long story short I was one of several children who raised their hands to say I would love to have one of the kittens. Of course, the devil is always in the detail with this kind of thing. I could have sworn he said something like “Blah blah blah let me know tomorrow”. It turns out he actually said “Check with your parents and let me know tomorrow”. Just semantics really. Anyway, I gave him the nod the next day and ‘project kitten’ was good to go.

A couple of days later my kitten was delivered to school. Before school that day I had fashioned a multi-purpose kitty-carrier to house the kitten at school and carry him home on my bike at the end of the day. It was a small open cardboard crate, with newspaper over the top. Solid as a rock.

Parental status – still very much in the dark unfortunately.

Then a few problems arose during the kitten transfer at school.

Firstly, it’s fairly safe to say that my classroom teacher, Mr M, was not on board with ‘project kitten’. He didn’t like the fact that one of his esteemed colleagues saw fit to bring kittens to school and distribute them to students, and he definitely didn’t like the fact that I planned on keeping my kitten in a home-styled kitty-carrier in the corner of the classroom for the rest of the day.

Secondly - and this proved to be the deal breaker - my new kitten was not completely satisfied with his temporary lodgings. He howled the biggest howls he could manage with his tiny kitten-voice. With every howl Mr M would flinch, and glare towards the box. It seemed to go on for hours but really it was only a few short minutes before the kitten liberated himself.  There was only one way this could go.

Nope, there was no phone call to my parents to collect their oldest child (and new kitten), no paperwork documenting my departure from school. There was just a middle aged man with a red face and steam coming out of his ears screaming “GET OUT! AND TAKE THAT BLASTED CAT WITH YOU!”

Obviously Mr M was not a cat person.

I assumed he wasn’t in the mood to provide any craft supplies to repair my kitty-carrier, so I quickly jettisoned that and marched myself over to the bike racks. Somehow I managed to ride all the way home clutching a screeching, scratching kitten to my upper torso, steering my bike with the other hand.

The relief at the end of the journey lasted only briefly, as I entered another level of hell - explaining the whole thing to my mother, who was in bed recuperating after an appendectomy.

This was certainly turning into a fine old mess.

Mum assured me that she would be ‘speaking to somebody’ about this, to arrange the return of our little ball of fluff as soon as possible. And with that hanging over me I hopped on my bike and returned from the fire back to the frying pan at school.

As I shuffled back into class, nursing my finely lacerated arms, Mr M barely acknowledged my return, nor did he enquire about the welfare of my furry friend. As long as I was sans kitten, that’s all that mattered.

I spent a very long afternoon wondering why my air-tight plan hadn’t gone as smoothly as I’d hoped. Things had certainly unravelled rather quickly, that’s for sure.

When I got home after school, bracing myself for trouble, I found the little grey kitten curled tightly in a ball beside mum on the bed.

For the longest time he didn’t have a name, and I’m not sure if that made him nervous. Eventually he became known as Grey Man. He lived to a ripe old age too, despite possibly using up several of his nine lives on that initial bike ride home.

I didn’t share that story with my kids as they set off for their excursion today. 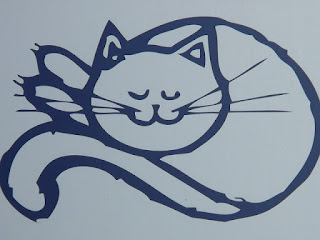